The NDP, Liberals, and Conservative MPs are not permitted by their party to vote for their consituents, but instead are mandated by the head of the party to vote as their respective caucus dictates they vote. When Kris did his research on this in 2015, the NDP were the worst offenders, with 100% of their votes being mandated by the caucus for the entire term, but the Liberals and Conservatives were not much better. It is Kris' opinion that what a citizen in rural Nunavut needs and wants is likely very different than a citizen downtown Toronto, so representation for one's views as a constituent is in the hands of the party and not their fellow citizens in their riding.

As of writing this, the Green Party of Canada is the only party of the national "big 4" that does not have whipped votes – the elected MPs are instructed to vote as per the constituents. 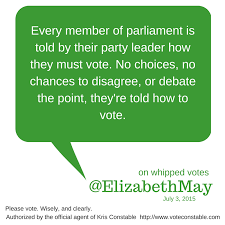 Social Media
Click here to send me an email!

Based on jekyll-rtd-theme modded & maintained by odw